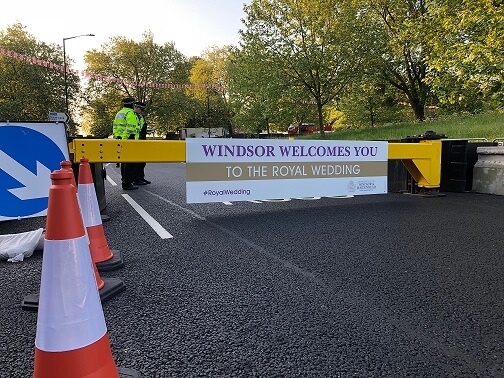 Royal weddings are among the UK’s most prestigious and important events.

When Prince Harry and Meghan Markle announced that they were to marry at Windsor Castle on May 19, 2018, rigorous planning began to ensure that the wedding of the new Duke and Duchess of Sussex ran smoothly and, most importantly, safely.

As the National Barrier Asset Contractor, Hardstaff Barriers assisted police to create one of the layers of security that kept the public safe. The event was watched by over 100,000 people in Windsor and by a worldwide TV audience of 1.9 billion.

Our experienced team surveyed the site and installed a range of products to form a perimeter around the castle and the wedding procession route, protecting the crowds from Vehicle as a Weapon (VAW) attack.

Available in a range of sizes, the gates have been tested.

These gates were attached to HVM Barges, which provide a level of safety for those on foot and protection against vehicle-borne attacks, while allowing the free flow of pedestrians.

Barges have been widely used across London and in Windsor as part of temporary and permanent solutions.

Typically installed alongside Barges, the Portals have also been tested.

HVM Concrete Barriers were installed along part of the boundary of the famous Long Walk that leads to Windsor Castle, protecting part of the 1.7 mile processional route.

The barriers were installed on time and as agreed. The products were carefully planned and selected to ensure that normal traffic flow and pedestrian access could continue before the event, until full road closures were effected. 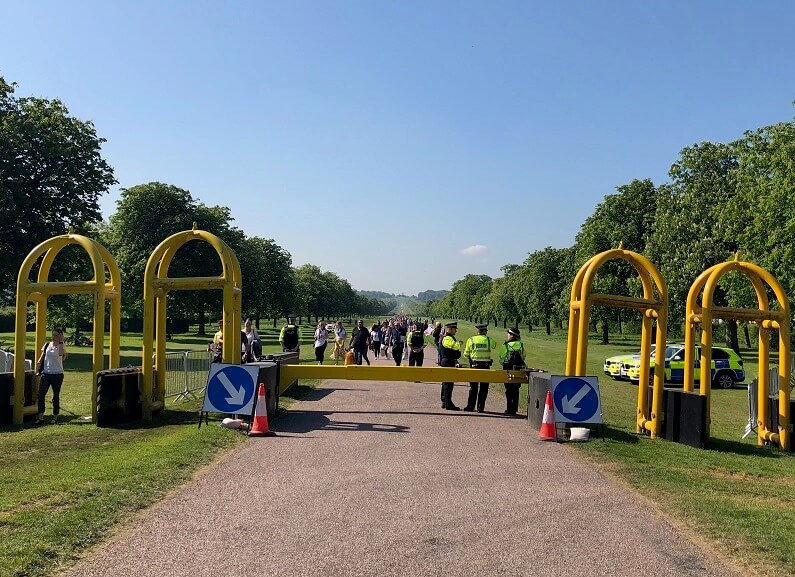 As a result, our crowd protection system contributed to keeping the many thousands of people who gathered around Windsor Castle safe, allowing them to enjoy the important occasion safely.

The event ran smoothly thanks to the wider security measures in place during the Royal Wedding, and Hardstaff is proud to have played its part in this.

A Thames Valley Police spokesman said after the event: “I’d like to pass on Thames Valley Police’s thanks for the superb work done by you and the National Barrier Asset installation team. We were tremendously impressed by what you achieved in such a short space of time. Thanks for a superb job.”

“We were tremendously impressed by what you achieved in such a short space of time. Thanks for a superb job.”
Thames Valley Police spokesman